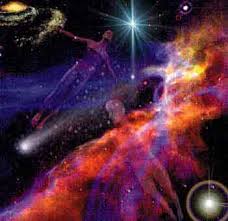 In reality, a person can't travel through doors to descend into another location within a city. In that sense, Damon had to astral project to maneuver between the astral world and the physical world. Whereas astral projection is rather weak in the movie, The Adjustment Bureau represents a metaphysical movie dealing with the unexplained.

The Source Code is all about astral projection. This movie explores the out-of-body-experience through a person who is obviously dead. Machines are keeping Jake's Gyllenhaal's character alive. Therefore, his mind is capable of leaving his partially dead body to travel into an astral world that only exists in the mind of another dead man. The writer creates a astral world from within another world to show the metaphysical elements of the explained versus scientific breakthroughs of unexplained then become explained.

Essentially, science must prove that one person can leave their mind to travel into another world. Astral travel is partially explained in literature. But the reality of astral projection relies on real accounts. It is quite possible that in a future world, a person will be able to astral project to find information in the mind of another person who is already deceased. As confusing as it may seam, the movie never touched on how the scientists were able to gain access to the mind of the deceased man on the train. The Source Code is all about the metaphysical elements of the unexplained and astral projection.

Movies using the psychic concept are usually show a character leaving their mind to enter another deceased individual. Therefore, a psychic senses the astral world through the mind of the deceased. The unexplained power can project the dead into the real world. Ghost may latch onto the metaphysical an out-of-body-experience of astral travel to bring the dead together again with the living.

I'm sure if I investigate further, there are many other movies that use astral projection as a concept. Metaphysical movies use engaging themes to show that life in the physical world might as well be imagined. The space in the astral world shows mind power working to explore the unexplained. Nevertheless, the mind is a powerful tool with the capability to project a person further into a fantasy world.

Astral travel and dreams are interrelated phenomenons. In decoding dreams, one must rely on dream symbols. To most people, dreams are a normal process in the living world. In the unexplained world, dreams convey to people that there is another world beyond the physical world. Astral travel displaces the subconscious mind to astral project a person into the astral world without limitations. Astral projection in movies will continue to be utilized in upcoming Hollywood projects.

Written by Jason Allen Goodlin
Image Credit:thesilvercomet.webs.com
Purchase The Devil Inside DVD and save 52%